BACK TO LOAN PORTFOLIO 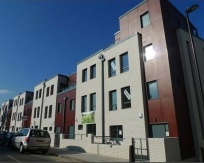 The subject property comprises a modern end of terrace 5 bedroom dwelling arranged over ground and three upper floors which forms part of a larger development of similar properties that were constructed during the period 2010-2012.

The property is currently being refurbished with a new kitchen, three bathroom suites and redecoration throughout. Valuation figures relate to the property in its current condition and state of repair.

The property occupies a rectangular shaped level site. To the front of the property is a small enclosed garden extending to a depth of approximately 1m and there is a rear enclosed courtyard which is accessed from the kitchen or lounge which extends to an area of approximately 10sq.m (110sq.ft).

The subject property is located within an established residential area known as Upper Holloway. Upper Holloway forms the northern part of Holloway and is an inner city district of the London Borough of Islington approximately 4 miles north of Central London. Holloway is bordered by Finsbury Park, Archway and Tufnell Park.

Transport links in the area are excellent with numerous bus routes and a number of underground stations are within easy walking distance including Archway (Northern Line), Holloway Road (Piccadilly Line) and Finsbury Park (Victoria and Piccadilly Lines). The closest station is Upper Holloway on a London Overground line.

Upon completion of the refurbishment works the property’s value will increase to £975,000, thus decreasing the LTV to 64.6%.

Furthermore the loan is cross collateralized with additional three residential properties, all with first legal charge, meaning that all four houses will remain as security until all four loans are paid in full. If any part of any of the loans remains unpaid all the four properties will remain as security until its full repayment. The securities for the all four properties are valued at £2,775,000 with the total LTV for all cross collateralized properties at 64.0%.

The director/shareholder of the borrowing company has provided a personal guarantee for the whole amount of the loan. His group of companies owns a substantial real estate portfolio in London.

The borrower intends to repay the loan by refinancing.

We now have a new name, logo, colour palette and website londoncredit.com that is in keeping with the London Credit name.

We are moving our brand into the future by adopting a new name and trademark as part of our ongoing evolution and integration into various digital platforms and channels.

We are the same great team embracing the same philosophy:

Bridging Finance that ... goes back to basics with the same values being:

A new more memorable name reflecting our efforts to differentiate our own unique identity from our other member firms. The creation of a stand-alone brand allows for more clear communication of the product and more effective use of marketing resources. As of today, the lending operations will be conducted by the UK company London Credit Limited, trading as London Credit, and the existing loans granted will be serviced until redemption by Consulco Finance, by which time the activities will have been fully assumed by London Credit.

We are committed to embracing the evolving business environment and maintaining the zeal for best practise.